The pine shoot beetle, Tomicus piniperda Linnaeus, native to Europe, was discovered in Ohio in 1992 and established populations have since been found in 19 U.S. states. It was first confirmed in Missouri in Macon County in April 2012, with subsequent confirmations in Lewis County in June 2012 and Marion County in July 2012. Survey efforts in spring 2013 detected this pest in Adair and Clark counties. Pine shoot beetle was detected in Scotland County in 2015. The beetle attacks new shoots of pine trees, stunting the growth of the trees. The pine shoot beetle may also attack stressed pine trees by breeding under the bark at the base of the trees. The beetles can cause severe decline in the health of the trees, and in some cases, kill the trees when high populations exist. In states regulated under the current United States Department of Agriculture quarantine, the beetle has been found in pine tree production areas, Christmas tree farms, nurseries, mature pine stands and areas surrounding mill yards that process pine logs. Pine trees make up a significant percentage of landscape trees and Christmas tree farm production. A pest alert with management information may be found here.

Missouri implemented a state interior quarantine in 2012 in an effort to control the spread of the beetle. The quarantine was most recently expanded in 2015 to reflect the new detections.

For more information on the pine shoot beetle, or the current quarantine status contact Collin Wamsley, State Entomologist, Missouri Department of Agriculture at (573) 751-5505.

For additional information on nationwide efforts to prevent the spread of the pine shoot beetle, visit the USDA Animal and Plant Health Inspection Service online at http://www.aphis.usda.gov/plant_health/plant_pest_info/psb/index.shtml. 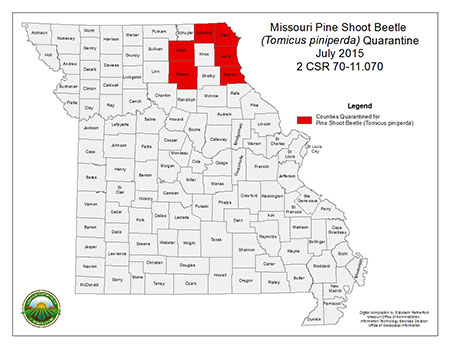