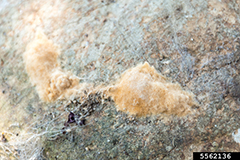 Spongy moth females lay their eggs on many man-made objects. Egg masses contain 500 to 1,000 eggs and are covered with buff or yellowish “hairs”. The velvety egg masses average at about an inch and a half long and three-quarters of an inch wide (a little bigger than a quarter). Photo courtesy of Washington State Department of Agriculture

The European Spongy Moth (Lymantria dispar) formerly known as the spongy moth, is one of North America’s most destructive invasive forest pests, defoliating up to 13 million acres of forest per year. It was first introduced near Boston, Massachusetts in the late 1860s and since then has expanded its range over the northeastern states.

While a reproducing population of spongy moths have never been found in Missouri, every year we find spongy moth life stages that have been transported here on outdoor household articles, vehicles or commercial shipments from infested states (see ‘Missouri Spongy Moth Positive Trap History Map’). The most notable findings were egg masses and caterpillars found in Dent County, and numerous male moths near Branson, Mo., in the 1990s. These introductions were successfully eliminated, delaying the establishment of the spongy moth in our state.

Spongy moth caterpillars voraciously feed on the foliage of hundreds of species of trees and shrubs but its preferred host is oak. Missouri has approximately 12.5 million acres of oak that could be severely damaged or killed by a spongy moth infestation. The pest feeds on the crown of trees and shrubs during the night. Several successive years of defoliation, along with contributions by other stress factors, often results in tree mortality. 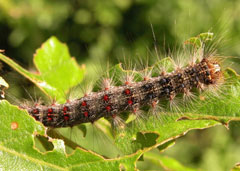 Spongy moth caterpillars have a double row of spots down their back. Starting at the head, the first five pairs of spots are blue, and the subsequent six pairs of spots are red. Photo courtesy of Ferenc Lakatos, University of West-Hungary, Bugwood.org

Spongy moth “hitchhikes” into new areas by traveling on outdoor household articles (vehicles, grills, toys, and lawn furniture, etc.) Spongy moth can spread up to 13 miles per year unassisted but hundreds of miles in a single day with human assistance.

If you are moving to Missouri from a spongy moth infested state (CT, DE, DC, *IL, *IN, ME, MD, MA, MI, *MN, NH, NJ, NY, *NC, *OH, PA, RI, VT, *VA, *WV, *WI) you are required by federal law to conduct an inspection of your outdoor household articles (patio furniture, lawn equipment, toys, grills, trailers, vehicles, etc.) for spongy moth egg masses and other life stages before you move. Check the spongy moth quarantine map to find out if you are moving from a gypsy moth infested area. 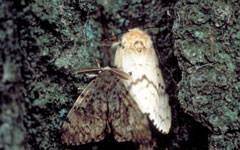 Each summer, multiple agencies in Missouri collaborate and place several thousand gypsy moth traps across the state. Traps are bright orange, triangular cardboard boxes usually placed on oak trees along roads. A pheromone lure inside the traps attracts male moths. These moths are then captured by the traps’ sticky-coated, inner walls. The first male moth trapped in Missouri was six miles northwest of Springfield in 1974.

If a moth is found, several traps will be placed in that location the next year to see if the moths are reproducing. These traps help us protect Missouri’s forests from this invasive insect, and should not be disturbed. (See ‘Missouri Spongy Moth Survey Positive Trap History Map’ to view positive trap history 1980 to present).

The spongy moth goes through four stages of development- egg, larva (caterpillar), pupa (cocoon) and adult (moth). Spongy moths breed during late summer. The females lay eggs in sheltered areas under tree bark and on or in many man-made objects including houses, vehicles, grills, toys and lawn furniture. Eggs overwinter and hatch in the spring. Upon hatching, young caterpillars crawl to the end of tree branches and disperse by spinning a silk thread that is caught and carried by wind currents. The grayish, hairy caterpillars are tiny and are difficult to identify at first but become easy to identify when about half-grown because they have pairs of blue and red dots on their back. Mature caterpillars are from 1.5 to 2.5 inches long. The spongy moth larvae reach maturity in mid-June to early-July and then pupate. Adult male moths have brown wings marked with dark, wavy bands, and a 1.5-inch wingspread. Adult female moths have similar markings, but are typically white and have a wingspread of about 2.5 inches. Because of its versatility, the spongy moth can spread up to 13 miles per year unassisted. With human assistance, they can travel hundreds of miles in a single day.

For questions or to report a possible infestation, contact the state entomologist at (573) 751-5505.